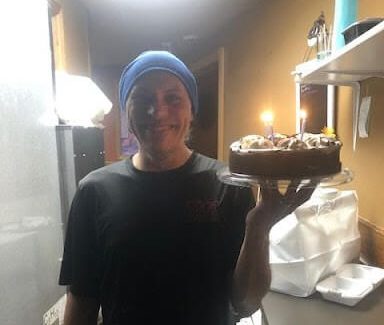 Bio: When Leon walked through the doors of Silver Fox Steakhouse, he didn’t know that he’d be there for the next 16 years.

“I saw in the newspaper that Silver Fox was hiring for a dishwasher, so I applied and got the job,” he said.

Leon said he started out as a dishwasher and did that for about a year, learning the ins and outs of the restaurant business. In doing so, he learned a lot about Silver Fox specifically, but also a lot about the industry as a whole.

After spending a year in the dish line, Leon was promoted to a cook position; a position he has held for the last 15 years.

In those 15 years, he has developed a relationship with many of his coworkers, including his boss, Chef Bernard.

“We’re pretty tight,” Leon said of his boss. “He’s a really good boss. I love him to death.”

Leon said that his favorite part about working for Silver Fox is seeing everybody laugh and smile, from the customers to his coworkers. He said that he considers himself to be a bit of the “class clown,” and he just enjoys making everybody around him smile.

He also loves the actual process of cooking. His favorite thing to cook is Silver Fox’s shrimp or calamari.

“It’s hard and it’s easy, kind of,” Leon laughed. “It’s hard because you’ve got to do all the breading and it takes about two minutes a piece to do. But it’s easy because after that, all I have to do is drop it in the fryer  and get it to my customers.”

In the restaurant business, the turnover rate is extremely high. People just don’t stay in one place for an extended amount of time. That’s not the case at Silver Fox; employees have been there for 5, 10, 20, or even 30 years! The reason for this is because of the culture Silver Fox has built for their employees; they treat them with an immense amount of respect and gratitude. It sounds cliché, but the team at Silver Fox really is a family. And it’s that family-like atmosphere that has kept Leon there for 16 years.

“I love the people I work with,” he said. “Especially Chef Bernard. I just want to tell him ‘Thank you, and I appreciate everything you’ve done.’”